More than 70% of seniors age 65 and older will need to be in a nursing home at some point, whether that’s for short-term or long-term care. When someone is in a nursing home, they expect to receive proper care – and that is what they should receive. Yet, every year, there are stories that come out about deplorable conditions in nursing homes and the poor care patients receive. No one wants their loved ones to be in that situation.

Seniors deserve to be treated properly, yet nursing homes are places where they may be abused or neglected. Even nursing homes that are known for being an excellent option for loved ones that need extra care can end up with reports of abuse or neglect. Knowing how to spot the signs and what to do about them are key to protecting loved ones in nursing homes and making sure they are cared for when they need it the most. 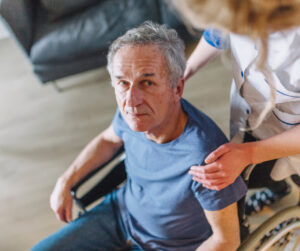 Stats About Neglect and Abuse

The statistics surrounding neglect and abuse are often difficult to obtain since there are likely many instances that are not reported. However, there have been some studies into abuse and neglect that can help shed light on just how pervasive they are and how many residents are impacted.

In 2001, a report by the House of Representatives stated that one out of every three nursing homes received citations because they broke federal laws. Based on the laws broken, there was either harm to a resident or the potential for harm. According to the same report, there was serious injury or the potential for death as a result of breaking federal laws in one out of every 10 nursing homes.

Another study focused on interviewing residents of nursing homes. Nearly half of the 2,000 respondents stated they had been abused. Around 95% stated they were victims of neglect or had seen another patient being neglected during their time in the nursing home.

Abuse and neglect cover a wide range of issues that can occur in nursing homes and impact the daily lives of seniors. The main types of abuse include physical, emotional, sexual, and financial. Neglect covers any failure to ensure that residents have the care they need during their stay in the nursing home.

Physical abuse can include hitting, kicking, or slapping residents, but it can include other situations, too. It can also include a failure to provide adequate food or water, restraining a resident excessively, or failing to provide the proper medications to the patient. When physical abuse occurs, there is the potential for serious harm or death as a result, though not all situations will rise to that level.

Sexual Abuse can include assault or humiliation. It can also include any type of improper touching, improper care for the patient when changing or bathing them, or any other instances of abuse that is sexually based. When sexual abuse does occur, the signs can be difficult to spot. If it is suspected, it is important to pay attention to the whole picture and get medical attention for the senior as soon as possible to see if sexual abuse has occurred.

Many seniors end up being victims of financial abuse. They may be scammed out of money by someone at the nursing home or have money stolen from their belongings or bank accounts. They may be convinced or forced to hand over the financial information that allows theft to occur or be convinced to give a staff member money that isn’t going toward their cost to be a resident. The missing money is a sign that financial abuse is occurring, as is money that isn’t going where it’s supposed to go.

Neglect is incredibly common in nursing homes and can happen at any time. With residents being unable to fully care for themselves, they depend on the staff to provide care and assistance. When this isn’t done, the resident is being neglected and could be physically or psychologically injured as a result. Neglect can lead to serious and life-threatening injuries. Some of the signs a resident is being neglected include the following.

Pay attention to the actions of the staff, too. If it’s not possible to visit a loved one in a nursing home, it could be a sign that there is something wrong, whether that’s neglect or abuse, and the nursing home is trying to cover it up. There are legitimate reasons to limit visitations, such as a lockdown of the facility, but they should always be temporary and lifted as quickly as possible. If the issue is ongoing, it could be a sign that something is wrong.

Staff members may also refuse to leave the room when someone is visiting a resident. This could also be a sign that something is wrong, as the presence of the staff member may be intended to prevent the resident from saying anything about abuse or neglect to a family member or friend. Privacy isn’t always possible in a nursing home setting, and staff members will come and go throughout the visit, but there should be the potential for at least some privacy during each visit.

What to Do If Neglect or Abuse is Suspected

At the first sign of any neglect or abuse, it’s crucial to get help for the resident. They likely are unable to speak up for themselves and speaking up may not help and could make the situation worse. Instead, a loved one may be needed to help with relocations, medical care for any injuries, filing a police report, and seeking legal assistance.

Relocating is likely going to be the first step, as this helps to get the senior out of the situation and away from the abuse or neglect. Take time to investigate other nursing homes or solutions in the area, but it is a good idea to work as quickly as possible. At the same time, consider filing a police report for the suspected abuse or neglect. There are also boards that oversee nursing homes, so filing a complaint may be a good idea. It is recommended to speak with the Law Offices of Wilkerson, Jones and Wilkerson first to make sure everything is done correctly.

When someone is abused or neglected in a nursing home, they may be able to receive compensation that is intended to help them financially recover from the situation. For instance, they may be able to sue the nursing home and receive funds to cover medical costs related to the abuse or neglect, money to help cover the cost of relocation, and other amounts to cover pain and suffering, emotional distress, and more. A lawyer is needed to navigate the complex court system, so the senior has a better chance of receiving as much compensation as they need.

Seeing a loved one injured or in distress is never something a person wants to go through. Walking into the nursing home, they expect to see their family member or friend being cared for properly, but that isn’t always what happens. With the potential for neglect and abuse being widespread in nursing homes today, it’s crucial to know the signs and what to do if anything is happening. If you discover a loved one is being abused or neglected while staying in a nursing home, start working on relocating them to a different facility and contact Wilkerson, Jones, and Wilkerson in South Carolina for help.