History of the Bicycle: Shrouded in Mystery

Bicycles are so prevalent today that it’s hard to imagine they were invented only about 200 years ago. And, the debate about who invented the first one isn’t going to get settled any time soon. An article published by the Smithsonian notes that a patent was issued to W.K. Clarkson, Jr. of New York on June 26, 1819 for a “velocipede.” But, as luck would have it, the documentation was burned up in the Patent Office fire of 1836. The article notes that “There is no evidence that the sport gained much popularity in the U.S. at the time.”

In Paris, in 1863, the development of the early form of bicycles known as the velocipede was advanced when someone added pedals to the front axle. That “someone” could have been Pierre Michaux, since it happened in his workshop. Or it could have been his employee, Pierre Lallement. In either case, Lallement moved to New Haven, Connecticut shortly thereafter; in 1866, he was granted a patent that provided “improvements in velocipedes.” Two years later, in New York, the Hanlon brothers improved upon Lallement’s design.

Right about that time, Americans became enthusiastic about this mode of transportation, so carriage buildings began making cycles. Riding schools sprung up in cities in the eastern part of the country, with Harvard University and Yale University students jumping on the craze.

After about a year of intense interest, though, many people stopped riding their cycles because they were “heavy and cumbersome.” The lack of cushioning didn’t make the ride very comfortable, and “the rider had to steer and pedal the same front wheel.” The bottom line is that you needed to be both strong and coordinated to ride one of these contraptions – and then when cities began passing ordinances banning them from sidewalks, the whole idea of riding one was just more trouble than it was worth.

In 1871, James Starley created the Ariel, which was a high-wheeled, wire-spoked bicycle that came to be known as the Ordinary. His version was modified and gained in popularity – and Americans began importing them. In 1878, Albert A. Pope decided that the United States needed a bicycle manufacturer, and he started producing the Columbia bicycle in Connecticut.

High-wheeled bicycles were fast and lightweight. But, because the center of gravity was right behind the front wheel, riders would sometimes fly over the handlebars. 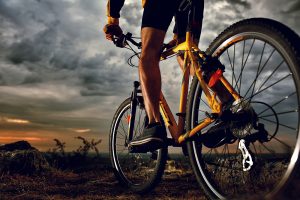 Safety-style bicycles then began being manufactured. They featured two smaller wheels of equal size. They also had gears and a chain driver. Then, pneumatic tires were invented by John Boyd Dunlop and brake improvements took place, making bicycles a safer mode of transportation.

In 1889, there were approximately 200,000 bicycles on the road. Ten years later? One million. We encourage you to read the rest of the Smithsonian article – and definitely look at the photos of the early bicycles! They’re fascinating.

Unfortunately, although bicycles today are much safer, that doesn’t prevent people from being in bicycle accidents. Read on if that has happened to you or a loved one.

Bicycle accident attorneys at the Law Offices of F. Craig Wilkerson can help you get compensation for your injuries. Visit our page on hiring a  personal injury attorney for bicycle accidents  for more information. You can also contact us online for a free case evaluation or call us at: