Bicycles and the Suffragette Movement 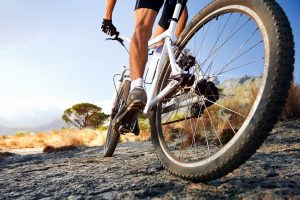 Since their invention in 1819, bicycles have had a long and varied history. Over the past 200 years, bicycling as an activity has been known as an alternative mode of transportation, a form of exercise and a sport. But one under-reported aspect of the history of bicycling is its role in the turn-of-the-century women’s rights movement. From the 1890s until women won the right to vote in 1920, bicycles became a tool for these women and a symbol for women’s rights.

The most straightforward effect of the bicycle on women’s lives was greater freedom of transportation. As bicycles became wildly popular in the 1890s, women no longer needed to rely on fathers, brothers or husbands to get from place to place. With a bicycle, they could leave the home without needing someone to transport them, thereby gaining new levels of freedom and autonomy.

This freedom helped women to begin to push back against Victorian gender roles that dictated they were physically delicate, should remain in the domestic sphere, and must rely on men. Louise Jeye wrote in 1895 that the cycle brought a new kind of emancipation to women: “Free to wheel, free to spin out in the glorious country, unhampered by chaperones … the young girl of today can feel the real independence of herself and, while she is building up her better constitution, she is developing her better mind.”

However, not everyone accepted these changes. As one man wrote in the Sunday Herald in 1891, “I think the most vicious thing I ever saw in all my life is a woman on a bicycle… I had thought that cigarette smoking was the worst thing a woman could do, but I have changed my mind.” Others wrung their hands at the potential impropriety of a woman straddling a bicycle seat while riding. While some doctors praised cycling as a healthy exercise, others raised concerns about its effects on women’s fragile constitutions, citing a range of side effects from sores and bruises to chronic dysentery.

One group who thoroughly embraced the bicycle was suffragettes. Activists Susan B. Anthony and Elizabeth Cady Stanton are both credited with saying that “woman is riding to suffrage on the bicycle.” The Winnipeg Free Press reported in 1912 about a group of English women’s suffrage protestors who built a barricade of bicycles across a London road to keep Winston Churchill from leaving for vacation. The bicycle delivered on its promise, according to the San Francisco Fall in 1895, “to put [woman] at the very front of the political procession, and to give her an advanced standing in all the other fields of thought and endeavor.”

Do You Need a South Carolina Bicycle Accident Lawyer?

Though women today do not need to fear social backlash for riding a bicycle, bicycle accidents are still a risk for any rider. If you or a loved one has been involved in a bicycle accident, personal injury attorneys at the Law Firm of F. Craig Wilkerson, Jr. can help you receive a settlement for your injuries. To schedule your free case evaluation, contact us online or call us at: