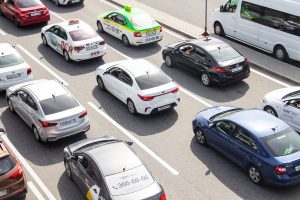 During the summer and early fall, roads are more congested as people travel more miles. Consequently, summer and early fall are also the most dangerous times of the year to drive, according to the Insurance Institute of Highway Safety. July and August rank as the deadliest months to drive, with a daily average of 116 fatalities throughout the country, followed by June with a daily average of 113.

The National Highway Safety Administration reports that most accidents occur between 3 p.m. and 6 p.m., when there are the most cars on the road. More accidents occur on Saturday than any other day of the week, mainly due to the influx of cars and alcohol-impaired drivers. Low gas prices encourage even more people to drive, exacerbating the problem. The drop in gas prices in the last few years may have contributed to the seven percent increase in accident fatalities between 2014 and 2015.

With these risks in mind, it’s important to learn how to drive in heavy traffic situations to reduce your risk of an accident:

The best way to avoid an accident from heavy traffic is to avoid it altogether. Pay attention to when the roads in your area get congested. Change your schedule or your route to avoid them. Even altering your schedule by fifteen minutes can make your drive quicker. In most cities, traffic is heaviest between 8 and 9 a.m. and 5 and 6 p.m. When travelling long distances, use online traffic trackers like Google Maps to plan your route.

When you do have to drive in heavy traffic, defensive driving is more important than ever. Pay close attention to your surroundings and avoid distractions like using your cell phone. Maintain a safe following distance of at least three seconds between you and the car in front of you. More distance gives you more reaction time in case the car suddenly brakes. Always signal before turning or merging. Keep a lookout for unsafe drivers around you, such as those who merge without signaling or drift in their lane.

Defensive driving will be easier to do if you don’t focus on speed. In heavy traffic, you may feel the need to drive as fast as you can, tailgate or weave between lanes to get to your destination quicker. But these dangerous tactics will only save you a few minutes at most, and could lead to an accident.

In densely packed freeway traffic, it’s best to avoid the pattern of slowing down, accelerating, then slowing down again with the car in front of you. This pattern of driving is stressful and can lead to a rear-end accident. Instead, try to stay six to ten seconds behind the car in front of you. When you see traffic in front of you braking, slow down gradually and avoid coming to a complete stop unless you must. When you slow down gradually, the congestion may break up before you reach it. This method also saves gas and lowers your chance of an accident.

Do You Need a South Carolina Car Accident Attorney?

No matter how carefully you plan, car accidents from traffic congestion are still a risk. If you have been involved in a car accident, Rock Hill personal injury attorney F. Craig Wilkerson can help. Wilkerson can help you negotiate with insurance companies to get the fair settlement you deserve and advocate for you throughout the process, representing you aggressively if the case goes to court. Contact us online to schedule a free case evaluation or call us at: